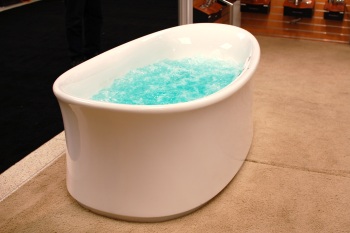 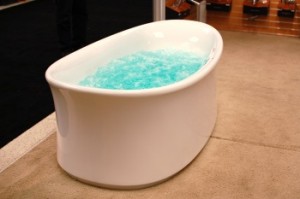 From September 30th to October 2nd, Ottawa’s Landsdowne Park hosted the Ottawa Home and Design Show. I’ve lived in Ottawa for a long time, and had often seen Bank Street turned into a virtual parking lot by the traffic headed for one of these large trade shows. But I hadn’t really made the effort to attend. After all, these things were for people with serious amounts of cash and square footage numbers that resemble the GDP of small countries, not DIYers with quantum-scale houselets like me. 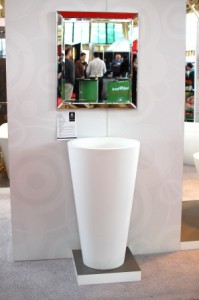 My favourite piece at the show: Dado quartz pedestal sink at the Caml-Tomlin booth. The soft texture was amazing!

I’m happy to report that I spent a fun couple of hours wandering from booth to booth, and catching snippets of various presentations from the speakers onstage. Accompanied by my mother, my sister, and partner Justin, it made for an enjoyable afternoon’s outing. Bear in mind that I’m one of those people who tends to get squirrely in large crowds – the extroverted will feel even more at home than I did.

Major highlights include several of the kitchen and bathroom exhibitors. I felt a kind of childlike awe at the Caml-Tomlin booth, while enjoying the engineering of one of their shower door suspension systems (and encountered the only chandelier I’ve ever seen that I didn’t hate with a white-hot passion). The stylish Mondeau booth featured a touch-activated sink that the salesman demonstrated for us. Justin and I wondered aloud if this meant that our water-obsessed cat would be running the thing by himself all day while we were at work, but not to fear – it had an off-switch. A hilarious low-flush toilet proof of concept demonstration featuring candy-hued silicone poops sliding safely down the pipe into a reservoir also leavened the mood. 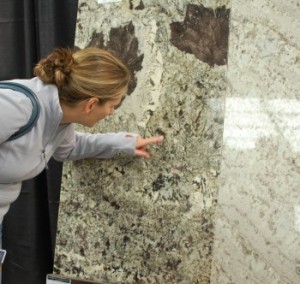 “Nature is so awesome!”

Flooring and countertop exhibits also made for some excellently-staged booths. Maybe it’s my weakness for geology coming out, but there’s something powerful about seeing a long row of massive slabs of highly-polished granite. There’s a Tolkeinian quality to seeing the bones of the earth crafted into artistic pieces for the home, every one unique. I think my sister put it best when she said, “Nature is so awesome!”

The on-stage speakers were a good mix of celebrities, local consultants, and visiting experts. The presentations didn’t last long, but there were some food for thought moments, especially from Californian architectural colour specialist Nan Cornfeld.

A few etiquette notes should be made if you’re not seriously shopping: make sure the exhibitors know at the start of the conversation, so they can decide if you’re wasting their time (they’re trying to earn a living, after all). Most of them enjoy talking shop with enthusiastic people, so they’ll generally keep chatting with you anyway. Give them good energy and good conversation, and they’re happy to share their knowledge. I always make it my mission to brighten the day of salespeople in general (thank you, Jess) because it makes my day better too. Best of all, I acquired a good collection of design porn brochures and business cards that should make any future shopping expeditions easier. 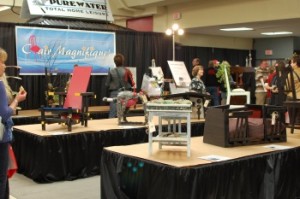 There are a few improvements that could be made to the overall show, however. I will say that I was expecting a bit more of an “en fête” atmosphere – things could definitely use a bit more livening up. Here’s what I would like to see next time:

In a nutshell, make it a swanky cocktail party with fabulous design and furnishings, and charge a slightly higher ticket price if needed (or introduce a 2-tier ticketing system with wristbands). There would be more buzz and more media coverage that way – and more fun!

Should you go to one of these events? I would say definitely say “yes” if you’re in the planning stages of a project, and looking for ideas. I’m not wealthy enough to afford almost everything I saw, but I did get an epiphany at one point looking at a pedestal sink, and now I know what I’m doing for that part of my eventual bathroom renovation.

Under no circumstances should you go if you have trouble with big-ticket impulse purchases.