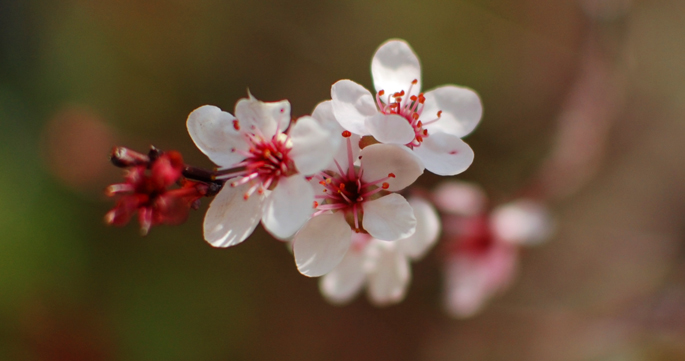 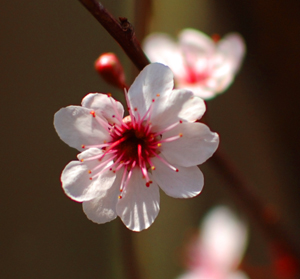 After the long trudge through March and April, spring has arrived in Ottawa at last! Everywhere people are getting outside and enjoying themselves, and those of us who love gardening are putting our plans for the season into action. Any minute now the early bloomers in the plant world are going to start putting on the pre-show for the season.

One of these early flowering shrubs is the purple leaf sand cherry. It’s one of the first bloomers in my garden in spring, sprouting hundreds of tiny flowers of a delicate pinkish white hue. The flowers are small, perhaps a centimetre in diameter, but the impact comes from the mass effect of a healthy shrub blossoming all at once. I’ve read reports that the flowers are supposed to have a nice fragrance, but I’ve never noticed much with mine.

This is a plant that is generally chosen for foliage colour as well as for flowers. The new leaves start out a vivid, deep red, and then slowly darken throughout the season to a darker burgundy, and by fall end up a deep green with an unusual bronze tinge. The red leaf colour is generally limited to the spring, early summer, and any new growth that appears. While I find myself wishing it would stay that way, I suppose it makes the spring colours a thing to appreciate in its time. The bark is a very smooth dark red, fading as it ages to a deep grey. With its demure blossoms, richly wine-coloured new growth and easygoing personality, the purple leaf sand cherry has earned a spot in many North American gardens. Cold-weather tolerant and forgiving of intense pruning, this is a great choice for a novice gardener like me.

This is a shrub that really prefers several hours of sun a day, and while the label on mine said “partial shade” I am dubious about this claim, judging from the agonized forum posts I’ve read from people who’ve planted in shadier locations. It may not need as much sun as a rose or a peony, but the more sun it gets the healthier it will be.

The blossoms of the purple leaf sand cherry are tiny but pretty.

In terms of size, this deciduous shrub is medium sized and grows from 6 – 10 feet high and can spread to a similar width, so it needs a bit of room. It is a strong grower, however, and like many shrubs can be pruned into a smaller shape. In fact, pruning it back helps it bush out a bit, as it tends to be a bit leggy by nature – maybe not the best choice if you’re looking for a plant for a privacy hedge. It makes a great accent plant, though!

The sand cherry likes soil that is very slightly alkaline, but also does well in neutral soil: it can stand a pH of anywhere from 6.0 to 7.5. This plant does best with an even but not excessive level of moisture; as long as it does not dry out completely or have wet feet all the time, it’s happy. In Ottawa where I live, it languished last summer when we had a moderately severe drought.

In terms of climate, the sand cherry has a large range – I’ve read reports of success with it from Arizona to Saskatchewan. For those who know their gardening zones, it should grow from Canadian Zone 8 – 4 (USDA Zone 7 – 3b). I live in an urban area, but not directly on a busy street. Mine doesn’t really get exposed to salt, which apparently it does not like at all. 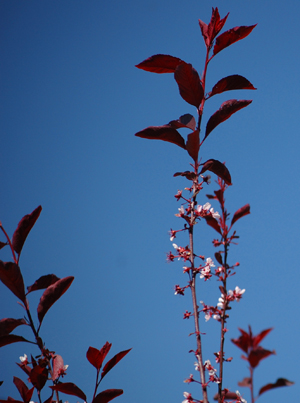 This is a rapidly growing plant. When left to its own devices, the purple leaf sand cherry tends towards a fan shape, with new growth spreading out from the base and from and existent trunks and branches. It suckers readily from the base. The new growth tends to reach out with long stems and minimal side branches, unless you prune back. This is an upward-reaching plant, unless of course it gets so leggy that the branches flop over.

Pruning works best after the spring flower show has come and gone – I’ve gotten desperate and pruned in late fall but it really reduced my flower crop the following year.

Things to Watch Out For

One of the vulnerabilities of this plant is its susceptibility to certain pests and diseases – mine was hit rather severely by beetles a few years back, but has since recovered (they weren’t Japanese beetles, which these plants are reportedly very susceptible to). I sprayed the plant with soapy water and that seemed to reduce but not eliminate the beetle problem. This appears to be a very common problem, as well as aphids, several different types of fungi, trunk cankers and borers. As with all plants, the first rule is to plant it in favourable conditions so that it can recover from pests and diseases from sheer good health.

Playing Well With Others

The purple leaf sand cherry is bird and bee friendly, but it isn’t the intense bee-magnet that my William Baffin rose is. Rural gardeners will want to note that deer love the leaves. It cohabits well with companion plants – mine is surrounded by myrtle or periwinkle.

Overall I would have to say this is a good plant for a beginner-level gardener, as long as you don’t mind pruning. It’s inexpensive and readily available at most garden centres, and because it’s a fast grower is great plant to learn to prune with. It doesn’t live forever, though, as it dies back after ten to fifteen years before finally giving up for good. Who knows – by that time perhaps you’ll be ready for something else. Mine is going to be making way for something a little more spectacular, so stay tuned!