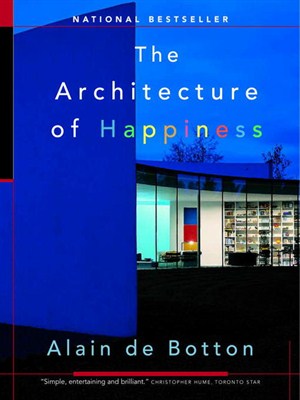 Humans build worlds; it’s what we do. Maybe they’re the small worlds inside our one-room rental apartments. Maybe they’re buildings, or the structures of entire cities. Whatever the scale, we use our minds and our tools to create baby universes in which to contain ourselves. And they in turn affect us.

How could they not? If a sunny day can cheer or a snowy day inspire contemplation, surely the sights we see when we wake every morning and come home from work every day become the emotional tea in which we steep.

Alain de Botton is a veteran explorer of human experiences. He is the bestselling writer who brought us “The Art of Travel” and “The Consolations of Philosophy”, and his books bring high ideas down to earth in what has been called a “philosophy of everyday life.” In “The Architecture of Happiness” he explores why we care about architecture, and how it can affect us. Mercifully free of the jargon of so many architectural books, this is a journey into the delights and challenges of the visual aspect of the worlds we build for ourselves, individually and collectively, and what they say about us.

Plus, it is so easy to read there are no excuses. Even if you don’t read, but you care about interior design and architecture, you should read it.

In case you need some convincing, let’s look at some of the avenues he travels down.

The Purpose of Beauty in an Ugly World

Our guide begins by acknowledging that in a world of war, starvation and disease, anything beyond the practical benefits of shelter can seem irrelevant. Many spiritual traditions point to a transcendence of the material world as the gateway through suffering, since anything material will inevitably fade. “The noblest architecture can sometimes do less for us than a siesta or an aspirin,” de Botton concedes.

The main argument for the appreciation of architecture is admittedly weak. Qualities we read in our surroundings like harmony, efficiency, or wonder may uplift some who care. But it doesn’t always work that way. The best architecture is often affordable by the very rich, who sometimes are looking for nothing more than an expression of power or wealth. We prize rare things as status symbols.

“Not only do beautiful houses falter as guarantors of happiness, they can also be accused of failing to improve the characters of those who live in them,” De Botton declares. A photograph of Nazi sub-commander Hermann Goering entertaining in his exquisite home brings the point home. De Botton provides a compelling answer that rings true: “Architecture may well possess moral messages; it simply has no power to enforce them. It offers suggestions instead of making laws. It invites, rather than orders, us to emulate its spirit and cannot prevent its own abuse.”

Allowing oneself to be sensitized to the effects of our surroundings can mean we are more vulnerable to the despair in a neglected space or an uncaring selection of materials.

So why embrace it? Why spend the extra resources on making a building that pleases, that becomes an “island of perfection”. Why spend your weekends in backbreaking labour to make an improvement, or wipe handprints from a wall?

The History of Architectural Beauty

For thousands of years, people built with local materials in the easiest and most effective way. Every region had homes that looked different, and worked for the climate. A Swiss chalet had to withstand heavy snow, and Mediterranean homes had to provide sanctuary from the sun. But those buildings didn’t count – they were just where the peasants lived.

In Europe as a whole, long centuries passed in which those who could afford it borrowed from Classical imagery. There was how architectural beauty was measured.

Things changed, however, at two pivotal points: the rise of the Gothic revival style, and the Industrial Revolution.

The Birth of Choice

The Gothic revival brought the idea of choice– to those who could pay. For the first time, the fan vaulted ceilings and turreted roofs leapt from churches and castles as an alternate to sober Classical lines. Some of the buildings looked interesting, many kind of silly.

But more importantly, the Gothic revival launched an era in which referencing the visual styles of other cultures for pleasure was allowed. Egyptian, Chinese, and Indian shapes began appearing in the homes of people who had never left Europe.

The box was open, and there was no closing the lid.

Then the next wave hit: the Industrial Revolution. It ushered in the era of the Engineer, with new technologies in the production of steel, glass and concrete.

The engineers had bigger problems to solve than how to decorate. They were tasked with building railway bridges that needed to bear immense weights for the lowest cost, and factories that needed to vent smoke. As peasant farmers migrated to new cities, cheap housing needed to be built for them. All of this was done without bothering to consult the architects.

The resulting modern era placed emphasis on practical considerations, and architects like Le Corbusier demonized the extra ornamentation of the past styles, and attempted to remove all affectation from architecture.

Or, at least they thought they did.

Under flat roofs that leaked and in bare rooms without comfortable places to sit, the new architects weren’t ruled by practicality as much as they thought they were.

Instead of looking sentimentally at a Classical or Medieval past, or imagining exploring other countries, the new architects were dreaming of the future for the first time. They wanted to be free of class and squalor.

In the dream of modernity, shapes were flat or swooshy even when they didn’t need to be. The “plain” white walls of modernist homes were crafted with ridiculous extra effort and expense.

Now, in the postmodern age, we are left trying to answer an impossible question: what does “good” architecture” mean?

De Botton’s answer is not what you think it is.

Pattern Recognition: How It Works

De Botton explains how we will always be connected to our environment, no matter how manufactured it becomes. We evolved to be able to extrapolate intentions from facial expressions. This ability translates into other areas as well – we can see a picture of a flying horse in the stars, or a sleeping giant in the shape of low hills.

Whether we want to or not, we take haphazard shapes and make pictures of them, even associating emotions with them.

Think of the number of human emotional connections we make in the names of animals, plants, and natural phenomena, like “weeping” willows, “angry” storm clouds. There have been a huge number of studies that document this effect. By nature, we read things and feelings into shapes.

Architecture and design matter because the worlds we inhabit influence us. Everything we see changes our minds forever, and we’d be wise to be mindful of that. We are, as they say, what we eat – even visually.

Alain de Botton has a gift for taking complex ideas and breaking them down so that anyone can enjoy reading about them. If you have any interest in design or life or understanding our crazy species, then read this book. You won’t regret it.