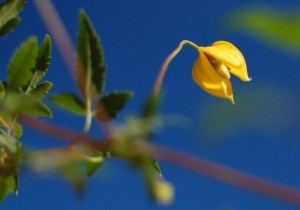 Clematis tangutica flower in the sun.

Many Ottawa gardeners know the clematis as a fragile, fussy beauty who rewards only the most dedicated of caretakers with its lovely blooms. There is, however, a variety that may not have flowers of such showy extravagance, but is much tougher. “Tangutica”, like all clematis varieties, is a perennial woody vine of the buttercup family, but, unlike its more fastidious in-laws, is one which can survive Ottawa’s winters without protection. This is a plant that comes in to its own in the fall, when most other plants are waning. The blooms, starting in August and September as tiny golden bells, age to become silvery tufts of down in October. As fall becomes winter, the puffballs become more cottony until winter winds blow them away. 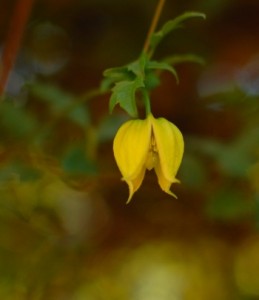 The lantern-like shape of the tangutica flower.

This plant has many nicknames, like Golden Clematis, Old Man’s Beard, and Virgin’s Bower. There are many cultivars of this plant as well, such as “Helios”, “Radar Love” and “Victoria”. Tangutica is native to mountainous areas of India and China. 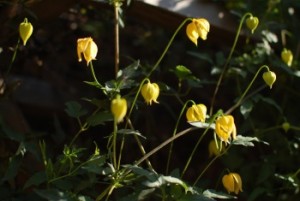 As with all plants, the secret to healthy growth is to learn what conditions it likes, and provide them. While other varieties of clematis tend to like partial shade, Tangutica likes as much sun as it can get from my experience. It also prefers slightly alkaline or neutral soil, so you may need to amend it with a few handfuls of lime if it is too acidic.

When planting, choose a location where its leaves will get full sun, but its roots will be shaded by mulch, wood chips, or other plants. As it can be leggy at the base, companion plants will also serve to provide some coverage for aesthetic reasons as well as shade. It’s important that the planting location also has good drainage – it does not like to soak in standing water. 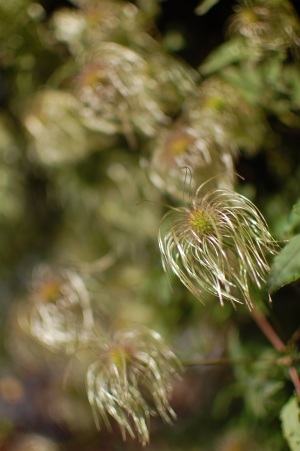 As a seedling, Tangutica sprouts several tender green stems which thicken and become woody as they age, and the rest of the growth follows the same pattern. As it grows, thin tendrils grab and curl around whatever they can. The leaves are a bright medium green, and roughly trident shaped.

Tangutica is a type 3 (aka type C) clematis, which means that it flowers on new growth. To maximize the flower crop, always prune in the spring, and then leave it alone. My vine tends to become unruly, however, so I use hedge clippers to shape it through early and midsummer, before flowering begins in earnest.

After a few years, it can become a shaggy old goat of a plant, with vines and dead leaves tangled together in thick mat. To renew the growth, many gardeners cut it back to a pair of strong buds at about 6 – 8 inches above the ground, again in the spring.

I fertilize my Tangutica with composted manure once a year in the spring – it shouldn’t require specially-balanced chemical fertilizers. Whenever I water, I make sure to water in the morning so that water doesn’t stay on the leaves too long. If it’s planted in the sun, it should be healthy enough to be reasonably disease resistant, but it is prone to powdery mildew, rust, and fungal spots.