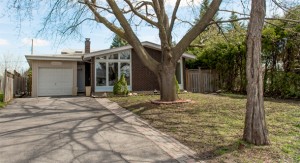 A couple of years ago my husband and I signed the papers on a house that is bigger and in a much nicer neighbourhood. After an exhausting DIY move (who knew we had so many tools!) we rolled up our sleeves and have been working on the new house ever since.

It’s not a decision most people are making. My cousin, for example, was going to pass over a house because she didn’t like the colour of paint on the walls. Most people want convenient homes so that they have more time to deal with jobs, families, and whatever they think is cool.

But not us – I like to think we’re a special kind of crazy. Here’s why we chose our fixer upper, and still love it in spite of the challenges.

We both hate sitting in cars, and fiercely resent the wasted time involved in commuting to work. The new house is fairly central, and a reasonable drive to work (my husband’s commute is 8 minutes, mine is about 30 minutes if I avoid the peak of rush hour). In Ottawa, mass transit is not well developed unless you’re going to or from downtown, where neither of us works.

When we were looking at houses, we saw some really nice ones further out of town. Each time, we talked about the fact that it would be a twenty or thirty minute drive just to get to the edge of the city on a Sunday afternoon, let alone in rush hour. It’s a distance that would mean the end of cycling to work for me in summer, which is something I love to do.

The new neighbourhood is older, and has lots of trees. It’s a lot like the neighbourhood I grew up in – and every house looks different from the others. That’s not something you find very often these days unless you’re prepared to pay a serious amount of cash.

2. We Wanted a Single Family Home

Our old house was a townhouse condo, and we were tired of paying condo fees and especially of hearing our neighbours. Our house was also tiny (903 square feet of living space, plus a basement), and didn’t have enough room for our projects. Every time we wanted to renovate, we lost a quarter of our living space. If people came over, there wasn’t a lot of room for them to sit at the table.

While we looked at a number of townhouses, we didn’t feel like we’d be getting our money’s worth. We didn’t like the compromises in layout, the lack of parking space for visitors, or the idea of sharings walls and roofs with other people.

The new house has a driveway, and an entryway that’s more than nine square feet. Several people can enter at the same time, easily remove shoes and boots, and hang up their coats without bumping into each other. That’s important to us, and we were prepared to take the hit in convenience to get it.

In this house, we’ve learned that there are a lot of people out there who think they’re handy, but who are really not. In fact, people like this are a menace to themselves and to others.

I say this because within weeks of moving in, my husband found and fixed a number of exciting electrical code violations, like ungrounded outlets, light switches without covers, unboxed connections lurking within walls, and even a live wire sticking right out of the furnace!

We also had roof leaks, a raccoon in the fireplace chimney, and a couple of plumbing leaks. Luckily I found these problems right when they started, and my husband had the know-how to deal with them.

If we weren’t handy (for real), we would have had to spend a lot of money to fix these issues, not to mention the possibility of injury, water damage, and fire. There have been a lot of weekends spent dealing with the issues, and even rooftop adventures at 4:30 AM in the freezing cold. Some problems we know we’re going to have to pay to be taken care of by professionals (more on that another time).

I freely admit that with my current level of knowledge, I couldn’t have dealt with these issues on my own. My better half’s engineering problem-solving ability and experience often saves the day – that, combined with my willingness to deal with drywall finishing.

I love people, but I need quiet and solitude to recharge from my busy work week. I also like working with my hands as much as possible.

We spend a lot of time at home doing all kinds of reno projects. For a pair of homebodies like us, spending on a home makes sense. For people who need to have lots of money available for clothes, travel, and the latest whatever, a townhouse makes more sense.

5. …Except that We Love to Entertain at Home

I spent my twenties and early thirties out on the town at night, watching great bands almost every weekend. I loved those years, but now I’m more of a morning person and the idea of staying up late just isn’t fun any more.

So whenever we can, we invite our friends over. We enjoy making food and having great conversations, and like having a house that’s large enough so that everyone can be comfortable.

The new house isn’t a bungalow, but it’s a split-level ranch house without long flights of stairs. Most of the living space is on one floor, so someday when our hips and knees go, we won’t have too much trouble getting around.

Buying a new home that’s better laid out for reduced mobility costs money. There’s land transfer taxes, lawyer’s fees, etc. Not to mention the costs of setting up the home the way we like it. I didn’t want to put time and energy into a house, only to have to do it all over again when we’re seniors. Thanks to my ability to think ahead to an almost absurd level, each renovation that we do is as future proof as possible.

Our house is the ugly duckling of the neighbourhood. While it would have been very stylish when it was first built in the 1960s, the house and especially the yard have been neglected for years. A few questionable design decisions had been made during the renovations, including the in-law suite that had been added, didn’t help. The kitchen was from the early 1990s, and looked it. The house had been on the market for 6 months – not a good sign.

But the foundation was fine, thanks to the slope of the land. The roof was in OK shape, and the house was basically sound overall.

When we purchased the home, it wasn’t priced to sell, but it was priced hundreds of thousands of dollars below the asking price of other houses in the neighbourhood. While we’ll have to spend a lot of time and money to get it into shape, we’ll be saving by doing the labour for many of the projects.

If we need to sell someday, we feel we’ll be getting a good return on our investment. But just to be clear – we won’t be able to flip it in a couple of years. That may work in some areas, but not where we are. While we’re very close to things like grocery stores, pharmacies and other basic amenities, it’s not one of the city’s hottest neighbourhoods.

For us, a fixer upper is definitely a challenge, but a doable challenge. We knew what we were getting into (for the most part), and are able to roll with the inevitable unexpected situations. We spend a lot of time reading and learning to try and solve problems. If you’ve got a good grasp of how home systems work and are good with the idea of spending most weekends making drywall dust or up on the roof, a fixer upper might be for you.

Any house will have problems someday. Fixer uppers have more problems right now. But some have unique living spaces that can really improve your outlook on life – we find we feel better about the time we spend at home because we have more space.

We also like knowing we have a lot of reno projects waiting in the queue, and a lot of skills to develop. In the end, it’s all about making sure your weekends are about doing what you love to do.