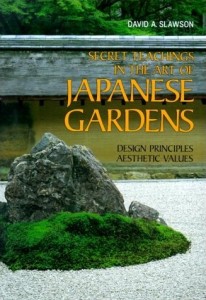 “Secret Teachings in the Art of Japanese Gardens” by David A. Slawson

This book is very different from most of the gardening design books you’ve already read: for one thing, the prose is very dense and academic. It also does not take the hundreds of glossy photographs approach. Nonetheless, I carried this book around with me for weeks, reading a page or two, and then having to stop and think about it for a few hours before I could continue: it’s that kind of book. Every paragraph is rich with ideas, and like an exquisitely prepared meal, you don’t just wolf it down. In short, this profound book is not just something you read: it is something you have a relationship with.

If this sounds like hyperbole, I promise you it isn’t: this book completely changed the way l see things. Like most people, I’ve always appreciated the look of Japanese gardens without understanding the principles that make them work. This book is a full exploration of the history, design fundamentals, and cultural background of these astounding gardens.

Let’s step back a bit, and provide a bit of background. Author David A. Slawson studied Japanese Garden design under several professors in Japan, and went on to get his Ph. D. in Japanese Aesthetics and Garden Design from Indiana University. The core of this book began as his doctoral dissertation. A story he tells in the preface helps the reader enter the new world for which this book is the gateway:

“One of the most important lessons I learned in the course of my apprenticeship in the art of Japanese gardens took place during year-end cleaning of the Yabunouchi tea garden in Kyoto. I had been squatting for some time with both feet flat on the ground in Japanese fashion, sweeping between the aspidistra (haran) with the customary bamboo whisk broom. It was an awkward position – I had to be constantly on guard so as not to plant one of my feet on a haran clump – and I was tired. To relieve the tension (so I thought), I shifted my weight forward onto the ball of my left foot, leaving my right foot flat on the ground with little weight on it. To my surprise, the crew chief reprimanded me. Then he told me what I had done wrong. His explanation took the form of a parable. Imagine, he said, that the master of this garden were a blind person. Close to the garden every day, he would constantly breathe its air and become sensitive to its every mood. The uneven distribution of my weight in cleaning the garden would produce a disturbance in the atmosphere of the garden, an uneasiness that the blind master would sense. Hence even in the simplest act of garden maintenance I must conduct myself in the spirit of harmony the garden is intended to convey.”

In the next few paragraphs, I am going to attempt to convey a small part of what I’ve learned. I already know I am going to get it wrong, because the first thought I had when I read the last word was “I really need to read this again”.

In a nutshell, Japanese gardens strive to replicate a landscape: forest, mountains, or seashore-in miniature. But there are a lot of visual principles that the designers exploit in order to give everything in the garden a simultaneous unity and sense of movement. There is an excellent chapter that outlines how this is accomplished using the way the human eye works.

Japanese garden composition is not based on rectangles, as is traditional Western design, but on triangles. Because triangles are very versatile in terms of leading the eye (they can point straight up, or to one side or another) the composition of a group of rocks or trees works to create a feeling of movement throughout the garden. The way the visual force vectors, or “movements” work together produces the sensory effect. The phrase the author uses is “the movement of objects at rest”, citing the metaphor of a photograph of dancers, caught in mid-movement.

These visual directions also have religious meaning: vertical force vectors convey heaven, horizontal force vectors are representative of the earth, and diagonal forces represent humans or animals in motion. Symbolic depictions of literary and Buddhist figures or scenes are an additional (if referential) layer of meaning.

Proportions of objects in close proximity to one another, combined with groups of these objects, expand upon this effect and take it in new directions. Differences in the angle of view or position of the viewer can produce different impressions of the garden, such as surprise effects created by the revelation of objects hidden when viewed from other positions.

I swear it was like trying to read a fractal.

Some lessons were clearer for me, however. The author solved several mysteries for me: one of which was why I didn’t understand Sakuteiki (a gardening manual written in the 12th century) when I tried to read it. Sakuteiki was almost infuriatingly vague, and Slawson explained why: gardening manuals of this type were considered secret texts that would be passed down only to trusted apprentices. These apprentices would have already spent years or decades learning how to position stones and care for trees-they would already have an immense depth of practical experience, and the manual would serve to reveal the high-level concepts, for the perfect Zen “aha” experience.

Why take this approach? The author points out that Japanese culture places value on conveying information experientially while here in the West there has been a traditional division between sensory input and cognition. In the 19th Century, Romantics like Frederick Law Olmstead were crossing this divide, but for the most part learning by doing is underemphasized, perhaps to our loss.

“Secret Teachings” is not an easy read, but it is an immensely worthwhile one. If you’ve had your fill of design books that don’t really explain anything and are ready to dive into something that will challenge you with new ideas, then “Secret Teachings” belongs on your book shelf. If you’ve ever wanted to really understand how Japanese garden designs work, this is the right book for you.